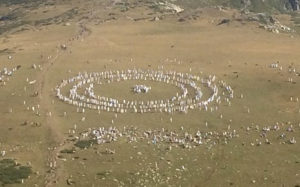 A participant captured this image of our Paneurythmy group dancing together with live music in the Rila Mountains of Bulgaria.

I had the good fortune this summer of spending a month in Eastern Europe with my dear friend and colleague, Marjorie Rehbach. We awoke to the sound of church bells each day (for the ‘old’ country still measures time in this way) and prepared to experience the activities that were part of a tour that was organized by Sarnia Guiton of Sophia Services, entitled In Search of the Future, A Tour of Discovery in Hungary, Romania and Bulgaria.

Sarnia related to us that Anthroposophy was planted in these Eastern European countries early in the last century. Communism kept it underground, prompting it to grow strong roots. At the end of that era, it grew strong and firm above ground and blossomed with joy that it could now be free. We have known none of that in the West. 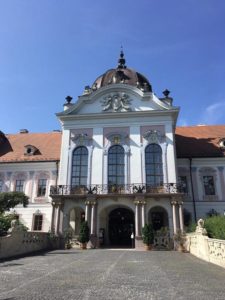 We felt the effects of oppression on some the older generation of people wherever we went, but we also were able to experience firsthand the awe and enthusiasm for this education in the younger people. Indeed, it has been said that the Slavs will lead the way in heart-thinking consciousness in the future.

We arrived in beautiful Budapest, the Paris of the east, and with our Waldorf guides we visited a baroque summer castle built for the emperor Franz Joseph and his wife Sisi, or Elizabeth who is cherished by the Hungarians. We learned a great deal about the history of this country and the difficult times that the people have been through. By getting to know our guides, we began to sense why the Anthroposophical initiatives are unfolding with joy, dedication, and heartwarming creativity!

The first initiative that we were brought to was a charming little farm school that was being renovated by parents to house the children with sensitivities that make it difficult for them to attend larger Waldorf schools. The building was being plastered with hay and everyone was involved! The people welcomed us warmly and treated us to a homemade, delicious traditional meal where fascinating conversations took place. 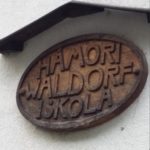 One of the highlights of the trip came next when we hopped on a train and arrived in the city of Miskolc where we were picked up and taken to a beautiful little town in the hills where traditionally an International Summer Camp was held. The seven of us were the only participants and we enjoyed daily trips, artistic activities, conversations, and delicious food. We were treated like treasured guests and became dear friends with our hosts. We visited the Hamor Waldorf School where I snapped some pictures of the wall of postcards from North America that were displayed to celebrate the 100 years of Waldorf.

I also snapped a picture of the beautiful mosaic that the 6th graders work on each year that surrounds the outside playground and some of the 12th graders work. We were treated to a talk by the administrator who related the joys and challenges of running a school with the Hungarian government involved. The last evenings at the camp were filled with traditional music and folk dancing that brought us a great deal of laughter and fun. 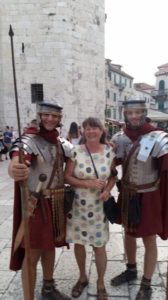 After leaving our blissful, heartwarming adventures in Hungary we began to experience the more dramatic landscape of Romania. Our crossing at the border took five hours! We had to have a new bus and driver replace the one who encountered the officials at the border in a bureaucratic way that we didn’t fully understand. We sang the day away while waiting.

Our first day was extremely moving for we visited Elie Wiesel’s house and the site commemorating where 38,000 Jewish souls were housed in the ghetto and then loaded on trains, most of whom did not return. The trains were bound for Auschwitz. We actually had a cousin of Elie’s with us on the tour whose mother and father had been on one of those trains.

We were happy to be on our way through the scenic Carpathian Mountains where we visited many lovely monasteries and rustic farming villages. I was charmed by the horse drawn carts that are still used daily and the village women in traditional dress going to church on Sundays. I also loved the storks who nested on the rooftops and telephone poles of the villages. This country is mysterious with many hidden layers. 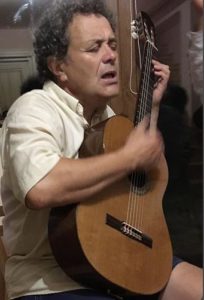 We spent a day in a biography workshop the Romanian way with George Oprea. We were then joined by two anthroposophists who helped us to appreciate the different healing places and nature beings of the gentle landscapes we passed through. On our last evening in Romania these new friends invited us to a small Anthroposophical community that they are part of, just outside Craiova near the southern border. After admiring the new and interesting homes they are building, we had a pizza party and a sing along. Our hostess performed dramatic and lovely ‘gypsy’ music for us and it was surely a memorable evening!

Our final destination was the beautiful and sacred Rila Mountains in Bulgaria, where we were to connect with the work of Peter Deunov (a contemporary of Rudolf Steiner who recognized his work) with a movement based practice called Paneurythmy. We learned the basic movements and headed up the mountain for a festival where 500 dancers would also be there. After a 25 minute ski lift ride with a 1000 foot elevation gain, we hiked the last hour and a half to dance to inspired, live music amidst the swirling clouds and blue skies of the country’s crown jewel, the Rilas. 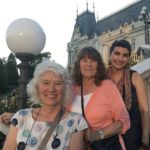 Marjorie (left) and I (center) ran into Oana, our former Eurthythmy teacher!

We can look back on a life changing journey and feel so grateful to be a part of the greater movement that is Waldorf Education.

Kolea Quincey is currently sixth grade teacher at OWS. She moved here from Hawaii in 2008 to be near her grown children and to enjoy the natural beauty of the Pacific Northwest.